EdMatrix, A Directory of Learning Standards

The EdMatrix chart and table categorize learning standards on two dimensions. Determining where standards are located on these dimensions helps understand which standards address similar needs and which are more complementary to each other.

A Taxonomy of Learning Standards

As of September 2022 this description is out of date. The taxonomy has bee updated based on some excellent meetings organized by Data Standards United. This page will be updated shortly.

There are three broad categories of standards that are involved in learning efforts: Data Standards, Competency & Achievement Standards, and Design & Practice Standards. The EdMatrix focuses primarily on the Data Standards but recognizes the importance and interconnectedness of the other standards categories.

Data Standards define the data elements and structures used to store and exchange learning and educational information. For education, the three major domains of data standards are Organizational Data, Pedagogical Data and Foundational Standards. These three data domains are further divided into seven categories which are described later in this document.

Competency frameworks appear all across academia and industry. In higher education, many universities define the Learning Outcomes for each course of study. Professional associations like IEEE and ASCP define the Competency Standards associated with their domain. Companies like Microsoft and CISCO define competencies required to be certified on their products.

Design & Practice Standards are the newest category in EdMatrix. These standards address human factors associated with learning experiences. For example W3C WCAG standards address the accessibility of websites to those with disabilities. Universal Design for Learning focuses on known principles for optimizing teaching and learning. FERPA and GDPR address student privacy.

The two main categories of educational data standards are organizational data and pedagogical data. The matrix also represents foundational standards that form the basis of most others.

Organizational Data standards focus on the students, educators and institutions involved in the educational process. This is where you find definitions for the records we keep about students, which learning experiences they have had, from which educators, and at which learning institutions.

Foundational Standards are basic standards with broad applicability on which other standards are built. For example, XML and JSON are general standards for representing and transmitting data. LOM is based on XML while CASE is based on JSON. HTTP and HTML are the standards for communication and documents for the world-wide-web. EDI is an old but still commonly used protocol for transmitting structured documents between institutions.

A Four-Layer Framework for Data Standards 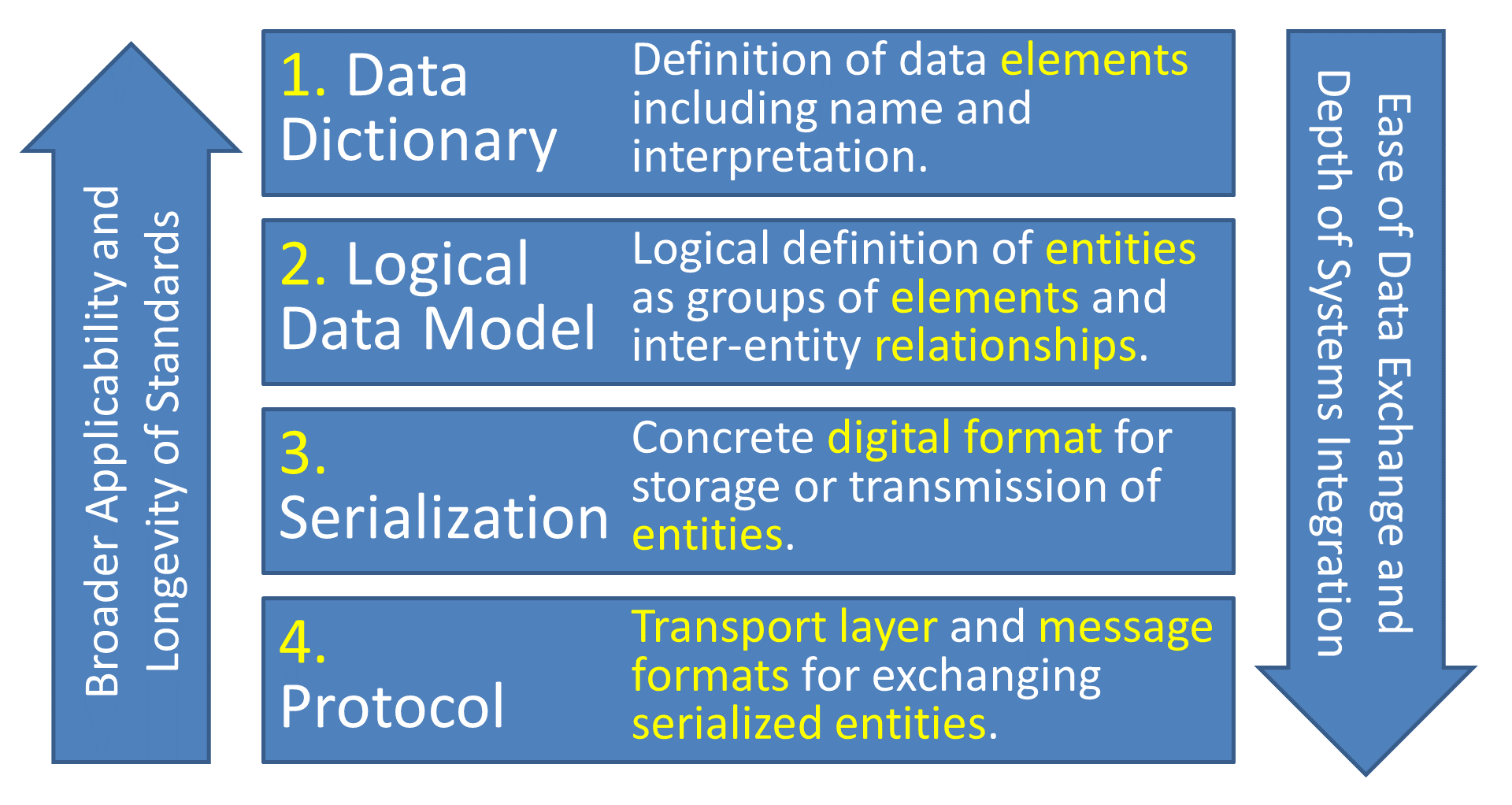 There are four layers of work that fit together in a data design effort. Not all layers need to be present in a particular standard, but each layer must be addressed in a functional system.

The task of systems integration becomes easier and less expensive as more layers are standardized. When all four layers are addressed, systems integration should be a matter of proper configuration settings with no custom programming required. On the other hand, standards (or portions thereof) that focus on the higher levels of the stack have broader applicability. For example, a principal benefit of a standardized Data Dictionary is reducing the risk that data may be interpreted differently by different systems. So, just standardizing the data dictionary achieves far-reaching benefits. Because of this, it’s important to clearly delineate between the layers even when a single standard or specification addresses more than one. 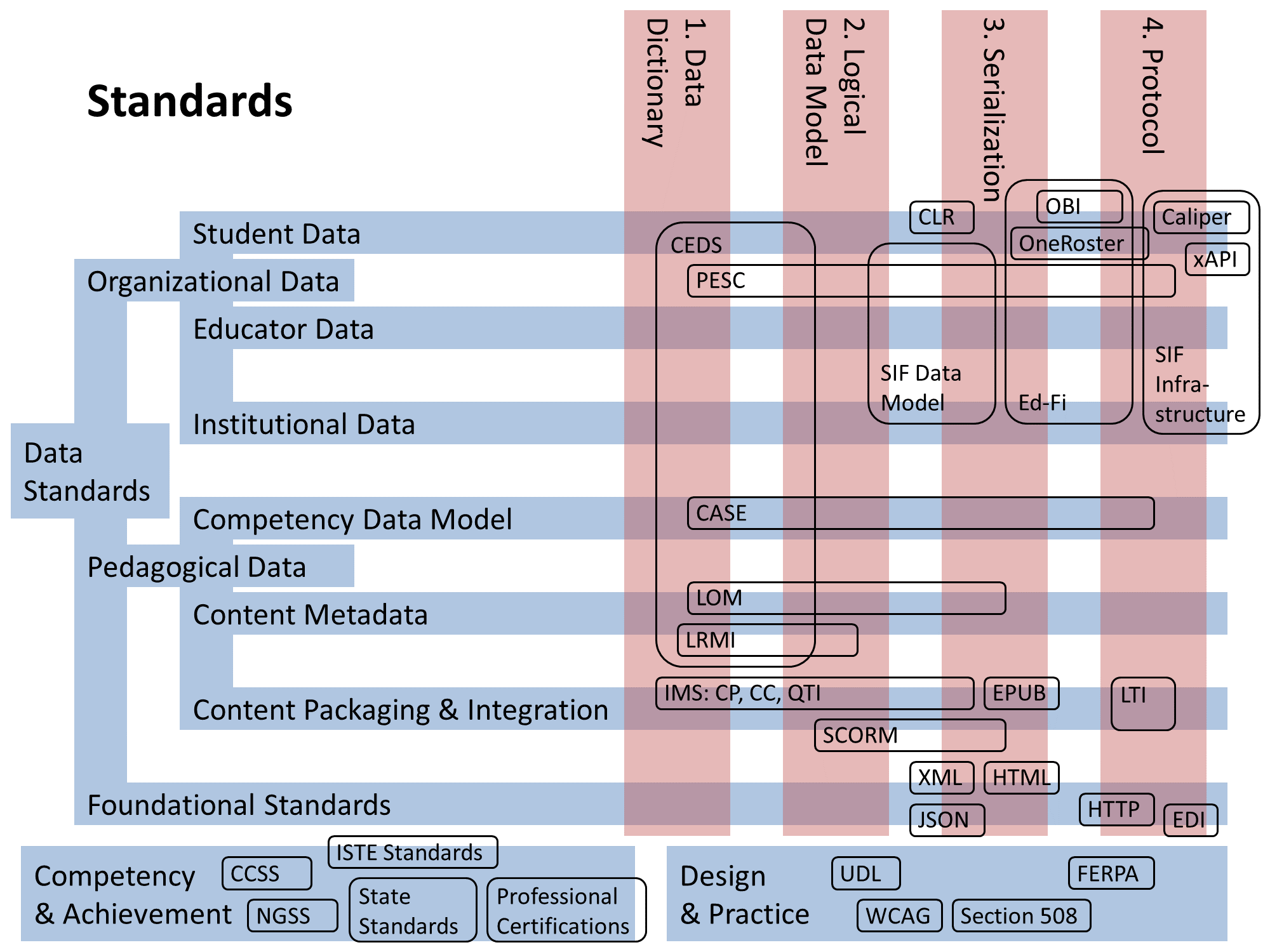 I have often said that personalized learning happens at the intersection of student data and content data. That is, when you can match the data we have about the student’s achievement against the data we have about the learning materials available to that student. In a broader sense, the benefits of standards are greatly multiplied when complementary standards are used together.

This is an update to two previous documents, A Four-Layer Framework for Data Standards and A Taxonomy of Education Standards. The two models were combined to produce EdMatrix.